Perec is a super sanserif family with many styles, all elegant and readable.

Buy
Starts at $29 for a single style and is available for: 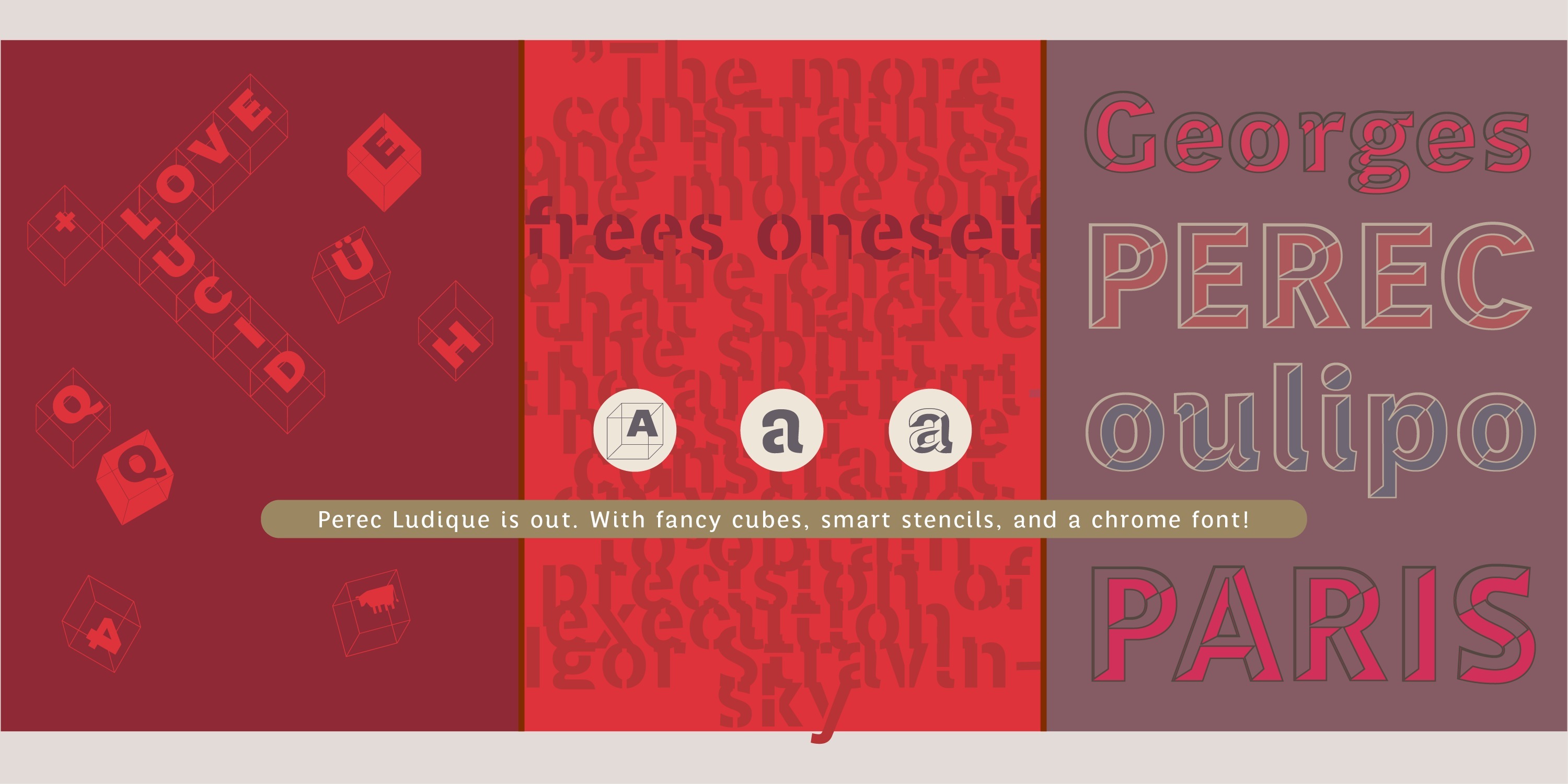 Perec Ludique is the distressed series of the Perec super family. It includes 3 fonts by now: Perec Ludique Cubes, a 3D crosswords puzzles font, Perec Ludique Oncle Jacques, a chrome font tribute to jeweller and pearls dealer relative to Georges Perec, and Perec Ludique Pochoir, an unconventional stencil with various alternate glyphs. The series will be completed with a special set of script fonts which gives you different writing styles choices (still under programming).

Georges Perec (1936 - 1982). French poet, novelist, scientific documentalist, composer, author of radiophonic pieces, lover of puzzles, film maker, parachutist, player of go, and author of the most difficult crosswords, Georges Perec is one of the most original writers of the literary revitalization of the second half of the 20th century. He was a member of the OuLiPo (Ouvrier de Littérature Potentielle) including people like Raymond Queneau, Harry Matthews, and Italo Calvino, a group that pursued a radical innovation of literature employing imaginative methods based on the idea of constraints. Perec's œuvre radiates an invigorating ludic sense, and his meticulous tales, acrobatically run across all literary genres and all époques. Among his most celebrated novels there are: Life: A User's Manual (La Vie mode d'emploi, 1978), A Gallery Portrait (Un cabinet d'amateur, 1979), and A Void (La Disparition, 1969, a lipogram, that is a text written without ever using the letter "e").

The type family Perec pays tribute to the genius of Georges Perec, it is a versatile super family that is formed by 3 series:

*Perec, a sensitive sanserif grotesque, including 15 fonts: romans, italics, and small caps declined in five weights. With a more delicate spirit than that of a sans grotesque Perec performs well not only in display sizes, where elegance and flair are needed, but also in text sizes as its open counters make it comfortably readable. Its smooth color texture and range of weights allow for a pleasant reading experience.

**Perec Ludique, the distressed display series, includes 3 fonts by now:
—Ludique Cubes, a crosswords puzzles font,
—Ludique OncleJacques, a chrome font tribute to a jeweler and pearls dealer relative of Georges Perec, and
—Ludique Pochoir, an unconventional stencil with various alternates.
The series will be completed with a special set of script fonts that gives you different writing style choices (still under programming).

***Perec Lunatique (unreleased yet), a rounded sans declined in 15 fonts: romans, italics, small caps for both text & display use, will also include a lunatic set of non-conventional though elegant ligatures.