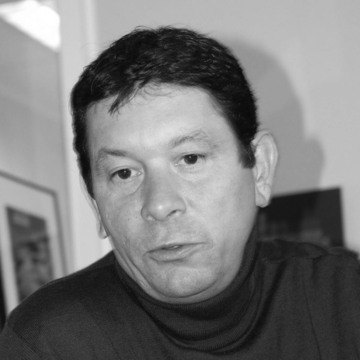 Franck Jalleau is a type designer and lapidary engraver. After studying Fine Arts at the Scriptorium in Toulouse from 1981 to 1985, he subsequently enrolled at the Atelier National de Création Typographique until 1987, where he then taught at the side of Ladislas Mandel and José Mendoza y Almeida from 1987 to 1990. He created typefaces for Agfa, for Magnard publishing, the commune of Brives-la-Gaillarde or for the ATD Quart-Monde movement. Attributed designer for the Imprimerie Nationale, he developed a program of exclusive recreations of historical faces since 1987. He notably designed the typefaces for the French passports and identity cards, for the tax code, and for numerous secure printed materials.

A teacher at the École Estienne, Franck Jalleau organizes a pedagogical course in typeface design. He also conducts numerous workshops in France and abroad. His engraved characters in stone can be seen from the Trocadero to the seat of the United Nations, by way of the Vatican and the villages in the Provence. He was awarded the Prix des Graphistes in 1988 and the Intergraphic prize in 2005, as well as several international prizes like the Morisawa Award in 1987 and 1996.