Yanone, (shorthand for Jan Gerner), is an exciting type designer, filmmaker, developer, and person. His recent commission led to an interesting exploratory process and resulted in the successful family expansion of one of our most popular and versatile typefaces, FF DIN®. By way of interview, he gives a short process tour of FF DIN Arabic, something completely new in the world of Arabic typography. 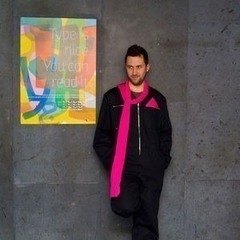 Yanone | “I’m a person who learned to listen to his intuition. The process for designing it was clear to me the very moment I received the offer. Even though I had designed FF Amman™ a few years earlier and have kept my interest in the Arabic script alive, I was still lacking much understanding of Arabic letter shapes and proportions that would be considered beautiful.

In order to achieve a better understanding, I did what a good Den Haag student would do: Pick up the pen and start writing. Now writing is not exactly what first comes to people’s minds when they think about DIN. I need to go a step back to explain it. If you ask a designer to describe DIN, you would most likely hear the words ‘geometric’ or ‘grid-based’. These are attributes that clearly suggest using the Arabic Kufi script as a construction model. But for me, DIN has always been more than geometric or grid-based. It might have to do with us as Germans being used to the typeface more than other people. All road signs, the previous car license plates, street names and much other public signage would be set in the DIN 1451 that FF DIN is based on.

If you asked me to describe DIN, I would add ‘ubiquitous’ and ‘undesigned’ to the established attributes, which are fairly abstract. In fact, DIN is the most undesigned typeface I know of and I can’t possibly describe my fascination with that. How can anything look undesigned?” “Now if you take these more abstract attributes and look for suitable Arabic writing models, you quickly end up with Naskh instead of Kufi. Today Naskh is the most widely used of the plentiful Arabic scripts. You’d find most books printed in Naskh and most on-screen typefaces either being Naskh or being closely based on it. And personally, I find Naskh by far the most beautiful.

So my plan was to learn about the beautiful Naskh proportions by writing endless pages of simplified Naskh, and then step by step boil the shapes down onto a grid from which I create drawings. I knew that the key to my approach to FF DIN Arabic was to achieve beautiful, effortless, and undesigned proportions. I’m saying ‘simplified’ Naskh here because elaborate Naskh calligraphy is still leaps away from what can be achieved with OpenType technology today. Most Arabic fonts would have to be described as simplified.

Interestingly, when I presented Albert-Jan Pool and FontShop with my design proposal, Albert-Jan quickly replied that this is in fact a fairly similar approach to how DIN 1451 came into being: As hand-writing models in DIN 16 and DIN 17 which only later evolved into the engineered 1451 design that we speak of today. My goal was set: Design an undesigned Arabic script.”

In the early experimentation phase of the design — how did you keep from going too far toward a dead end?

Yanone | “I didn't have to. My plan was so linear and straightforward that it involved only the least experimentation. In talking to my peers we’ve changed a few letter constructions here and there of course, but a dead end was never in sight.”

Were there Arabic ‘industrial sans’ models to reference?

Yanone | “Not to my knowledge. All samples of typography that I’ve seen from back in the days that involved Western ‘industrial sans’ typefaces would be accompanied by very calligraphic Arabic Thuluth or Naskh calligraphy, for instance. Many others of the plentiful experimental Arabic ‘sans’ faces I wouldn’t describe as industrial.”

The Arabic script itself is pretty diversely used and interpreted depending on one’s cultural background. How did you manage all the different expectations so that the face didn’t appear too formal or informal, or too Persian, or Arabian, etc.?

Yanone | “The expectations were pretty clear: Make an Arabic typeface to match FF DIN that is most suitable for today’s graphic design, even though DIN’s inception goes some 120 year back now and its design needs to be respected of course. In other words: Make it look awesome! Making things look contemporary and awesome requires zero consideration of Orientalism. The Arabic design world today is no different than the Western, which is why it came at no additional effort for me to make it. We all share the same cultural background: Neon! And my own expectations could probably be described as: Make it most legible while retaining FF DIN’s punch. Formal or informal are different categories to consider, though, and I’m not sure how to answer it. A good balance, I suppose? As a consequence of DIN’s undesignedness you end up spotting it in the far corners of both formal and informal environments; a split few other typefaces manage to achieve. How interesting!”

Did certain weights or styles present any interesting challenges?

Yanone | “I know that type designers are always asked to admit their challenges. But: No. The real challenge lied in finding the beautiful proportions as described above. The digital design stage after that went smoothly.”