In the run-up to the quarter finals between Argentina and Belgium in the FIFA World Cup this Saturday, I conducted an interview with Eduardo Manso. Eduardo designed the custom face used for all the Puma national teams.

I have been following Eduardo Manso – the Argentinian-born type designer working and living in Barcelona, Spain – ever since reviewing his intriguing serif face Relato for my 2005 Typographer.org limited edition booklet. Eduardo designed the custom face used for all the Puma national teams – Italy, Chile, Uruguay, Switzerland, Cameroon, Côte d’Ivoire, Algeria, Ghana, plus a number of teams that didn’t qualify for the World Cup and some of the football clubs in the national competitions. The typeface was commissioned in 2012 by London agency GBH. 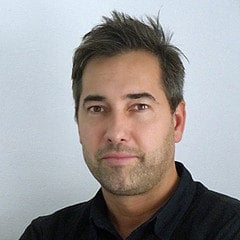 What was the inspiration behind your design for Puma?

Eduardo Manso | “Puma has been using my 2009 square sans serif Geogrotesque in all of their communication. They wanted a condensed version for the World Cup football jerseys. Along with the briefing GBH London sent me some examples created by them. Basically, the concept was to try to incorporate the marks of the football pitch into a condensed version of Geogrotesque. My interpretation was not too literal. I replaced all diagonals by subtle curves, so it still refers to the football pitch but preserves the legibility while creating a unique personality at the same time.”

“The challenge was to design very condensed numbers for a “second skin” jersey. The FIFA regulations with regards to the size of the players’ numbers and names sizes don’t mention anything about the widths, only the heights. However numbers of a regular width simply don’t work on this type of shirts, because they tend to disappear towards the sides of the player’s torso. This meant we had to fit numbers comprising of two digits in an area of almost square proportions (24 × 25,5).”

“It was also crucial to properly differentiate similar-looking numbers like 6, 8 & 9 for example, to avoid confusing the football commentators or the people announcing the transfers. My personal favourite is the number 4; I think it is really unique. We also designed two alternate ‘A’s for use in specific conditions. The resulting typeface only has capitals and covers the Latin Extended character set. It has a nice but unusually long name – Nature of Believing – that matches Puma’s World Cup campaign.”

Was the design a smooth process, or did it go through many revisions?

Eduardo Manso | “The process was straightforward. I drew alternate versions for a couple of characters, just to make sure the path we chose was the correct one, but that’s about it. Mark Bonner, the creative director of from GBH, was easy to work with, because he had very clear ideas about what they wanted. And this is quite rare among type clients.”

Geogrotesque became this huge success story for your EmType foundry. What were your goals when you initially designed the family?

Eduardo Manso | “Geogrotesque is very special to me. After I had already created several font families, I realised that – as a graphic designer – I didn’t really feel like using my own typefaces more than once or twice. This had me wondering why for a long time. Finally I came to the conclusion that I preferred simpler, more versatile designs; in other words: timeless faces. So I developed Geogrotesque as a direct answer to my own question. It’s a geometric, squarish typeface which incorporates some grotesque characteristics. Its formal principle is actually really simple: a square with an oval at the top and the bottom. All the letters are based on that same structure. I added a subtle rounded finish to soften up the strict geometry a little.”

“I am really proud of Geogrotesque because it is simple but still has a distinct personality. During its development I never thought that I was onto something special because I basically made the typeface for myself, only to satisfy my own needs. At some point I even thought it would too simple to be interesting for anyone else. I am a firm believer in pure design and I avoid following trends. Furthermore I consider myself a non-conformist, so whenever one of my creations becomes successful this always comes as a surprise.”

Now that the FIFA World Cup is in full effect, how does it feel to have so many millions of people see your typeface on television?

Eduardo Manso | “I must confess I am very much a football fan myself. In fact I didn’t miss almost any World Cup match, especially the ones played by Argentina and the Puma teams. We usually meet with a large group of Argentinian friends to watch the games. Those millions of viewers who watch the matches on TV are lucky because they can watch pure football. I on the other hand, I always get distracted and catch myself examining the letters and numbers on the shirts. This sometimes has bizarre side-effects. For example when Argentina beat Switzerland I had mixed feelings. I felt sorry that Switzerland did not continue, just because I really liked the letters on their shirts. Even worse, my insanity seems to be contagious for my friends. At the end of the Italy – England match a friend of mine sent me a text message which read: Manso 2 – 1 Brody. Kidding aside, I feel very proud that I did this job. Because as far as I know Puma is the only brand that uses the same typeface for all its teams the exposure of the font is enormous.”

One country missing from the Puma line-up is your native Argentina. Do you regret not having been able to design for your national team?

Eduardo Manso | “Absolutely. Unfortunately the national team of Argentina is sponsored by Adidas. So one of my dreams remains to get the opportunity to design the typography for the Argentinian jerseys (and for Barcelona too). I am quite sure that for a type designer who also is a football fan there is no better commission in the world than to design the typeface for your national or your favourite team. Well, you never know – maybe for the next World Cup…”

Thank you for this interview, Eduardo, and we’ll see on Saturday when our national teams clash.