Jonathan Barnbrook is a type and graphic designer known for knitting together these disciplines at any given occasion. His London-based design studio works for international clients all over Europe, in the United States and in South-East Asia. Besides shaping visual identities for the Mystetskyi Arsenal museum in Ukraine, the Mori Arts Center in Japan, or the Art Basel art fairs, Barnbrook is perhaps best known within the design scene for his much-discussed artworks for David Bowie’s album covers. Since 2016, he is a member of the FontFont Type Board. In this interview, Barnbrook talks about early digital type design, what he looks for in submitted typefaces, and the role of the FontFont type library. 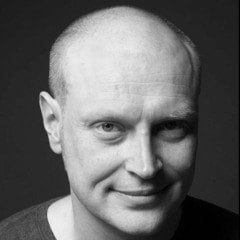 Barnbrook’s first steps in type design began with the birth of type design on desktop computers at the Royal College of Art London. After releasing his first typefaces Bastard, Exocet and Mason with Emigre in the early 1990s, he decided to set up his own digital type foundry Virus Fonts in 1997. With Virus he continued to release typefaces that question conventions of readability such as Drone (1997) and False Idol (1997, Barnbrook’s take on Helvetica), as well as the more recent design Doctrine (2013) along with its stencil companion that was inspired by the lettering of North Korea’s airline Air Koryo.

Since last year you are a member of the FontFont Type Board that values typeface proposals. What are you looking for in typeface submissions?

Jonathan Barnbrook | There are so many typefaces around today. One of the things I am looking for is something new—and that is very, very difficult. However, if it is not new, does it fulfill criteria another font does not have? Is there a space and is it well drawn? Actually, I think some of my earlier fonts are quite badly drawn. In fact, they were redrawn quite recently [laughs]. But the point is: you use Bézier curves on a computer and actually they are not that intuitive, so let’s go with the modular approach and make that part of the typeface. There are some very naive fonts submitted to FontFont, but that is quite alright because technology allows people to have access to that.

Do you have a certain set of criteria when you look at typeface designs?

JB | I think the first reaction to a typeface is an emotional one, quite obviously, whether you like it or not. Then other reactions follow that. You can tell rather quickly, within five seconds, whether a font is well drawn or not. Unless the intention has been to make it look badly drawn. That’s not an easy thing to engage. A font either works or it doesn’t. It is like when publishers tell you within seconds whether a manuscript is worth publishing or not. It feels right or it doesn’t. But then of course, you need to have a proper discussion. You cannot just dismiss it and you should be open to revising your opinion.

What was your impression of the desktop type design scene in the 1990s that you were a part of? Was there an industry standard regarding technology, or did the designers go their own ways on things?

JB | There wasn’t much industry standard basically. If a type design did not clash with another font in terms of the original idea, you could submit it. It was like a small band producing music and just putting it out there. It may have been flawed; however, if it was interesting, it was OK. There was a lot of resistance to it: Older font designers thought we were Satan—which was quite exciting on the one hand, but of course this was rubbish. It was the case of one generation misunderstanding the other. Particularly people from California said, what we were doing, was not proper font design. Jeff Keedy for instance just cut the serifs off Times and released it as a font. People responded: This isn’t a font. But of course it is, there is a philosophical reason behind it. So it was a lot of a misunderstanding, and actually, it was quite exciting to see how much people could piss other people off. Not in terms of just winding them up, but coming up with a new idea and releasing it.

JB | This reminds me a bit of the turn of the 20th century when there were a lot of contemporary artists creating work that would shake up the establishment. I mean this is all in the world of font design, so it is not really known to the wider society, but it was a very interesting creative time. Whenever a new piece of technology comes into any artistic discipline, people first think about how it would replace existing technology. But then there is the other question of how it creates something really unique itself. I remember the word that was being used a lot at the time was vernacular, which is an architectural term: Taking the building materials you have around you and creating fonts. Fonts from California for the first time looked like they were actually designed in California—the same goes for fonts in London. In fact, my own fonts could have been done anywhere else. But Emigre was so Californian.

Where do you see the FontFont library positioned among digital type foundries today? How did this position change in the last 25 years?

JB | I think the FontFont library is all about carefully curating good fonts which are interesting and usually extremely well drawn. So it is not about novelty, but about presenting something new—not new for the sake of being new or new in an immature way: “here’s something different”. It is about “this has got something fresh about it, but it will still be fit for purpose.” I think FontFont’s role now is different to what it was in the beginning when it was actually an outlet for the most radical fonts. Now the whole industry has matured. When we go to the FontShop or the FontFont website, we know it is going to be a good typeface because it will have a certain energy.

Thank you for the conversation, Jonathan, and best wishes for many upcoming type boards.

Want to have your type design reviewed by Jonathan Barnbrook and become a FontFont designer? Find out more here.

Trademark attribution notice All trademarks and copyrights are the property of their respective owners.

Ferdinand Ulrich is a Berlin-based typographer and type historian. With Erik Spiekermann he explores the possibilities of post-digital letterpress printing at p98a.berlin. Since 2015 he pursues a PhD on the history of digital type design technologies at the University of Reading.
comments powered by Disqus
© 2022 Monotype Contact FAQs Sitemap Legal/Imprint Fonts used Affiliate
Top